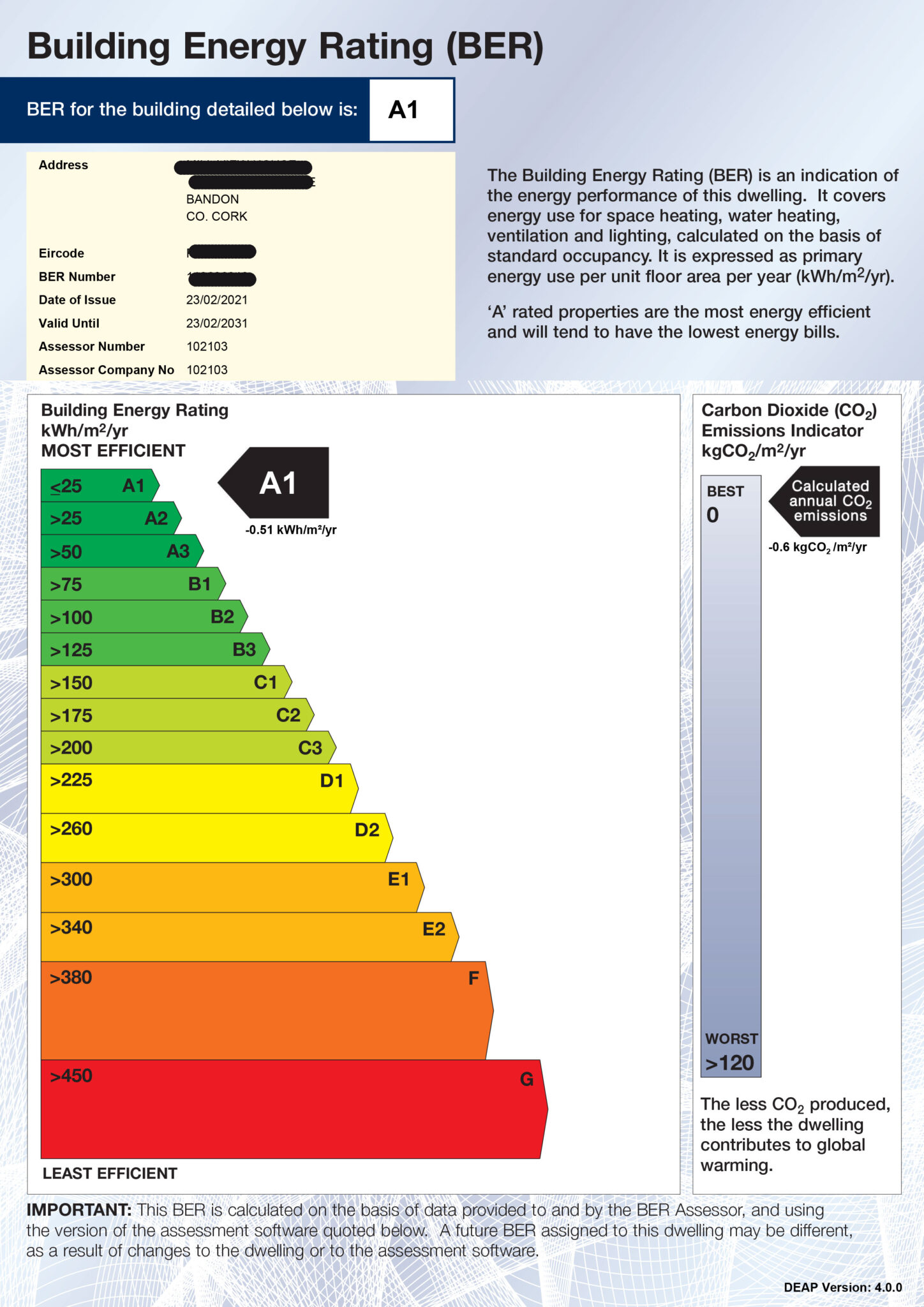 Not only that but the assessment produced a negative energy and Carbon emission value, due to the production of solar pv electricity relative to the energy consumption of the house.

In fact the house performs better than the BER declaration, because we opted to use some default values for certain elements rather than spend more money proving we exceeded the default. This was for the bespoke roof-lights where we accepted a u-value of 1.5 kW/m2K instead of 0.7 kW/m2K. We also used the ‘ACD’ declared thermal bridge factor instead of recalculating all of these, which would have demonstrated far higher energy performance. We did this because we had commissioned many of these already as part of the PassivHaus certification, which was the ultimate goal, and the methodology is not interchangeable with the BER.

You can search for BER data here, https://ndber.seai.ie/ you just have to register with an email.

You can find out much more on this project here https://pmnarchitecture.ie/passive-house-bandon/ including video, photos and information on passivhaus. 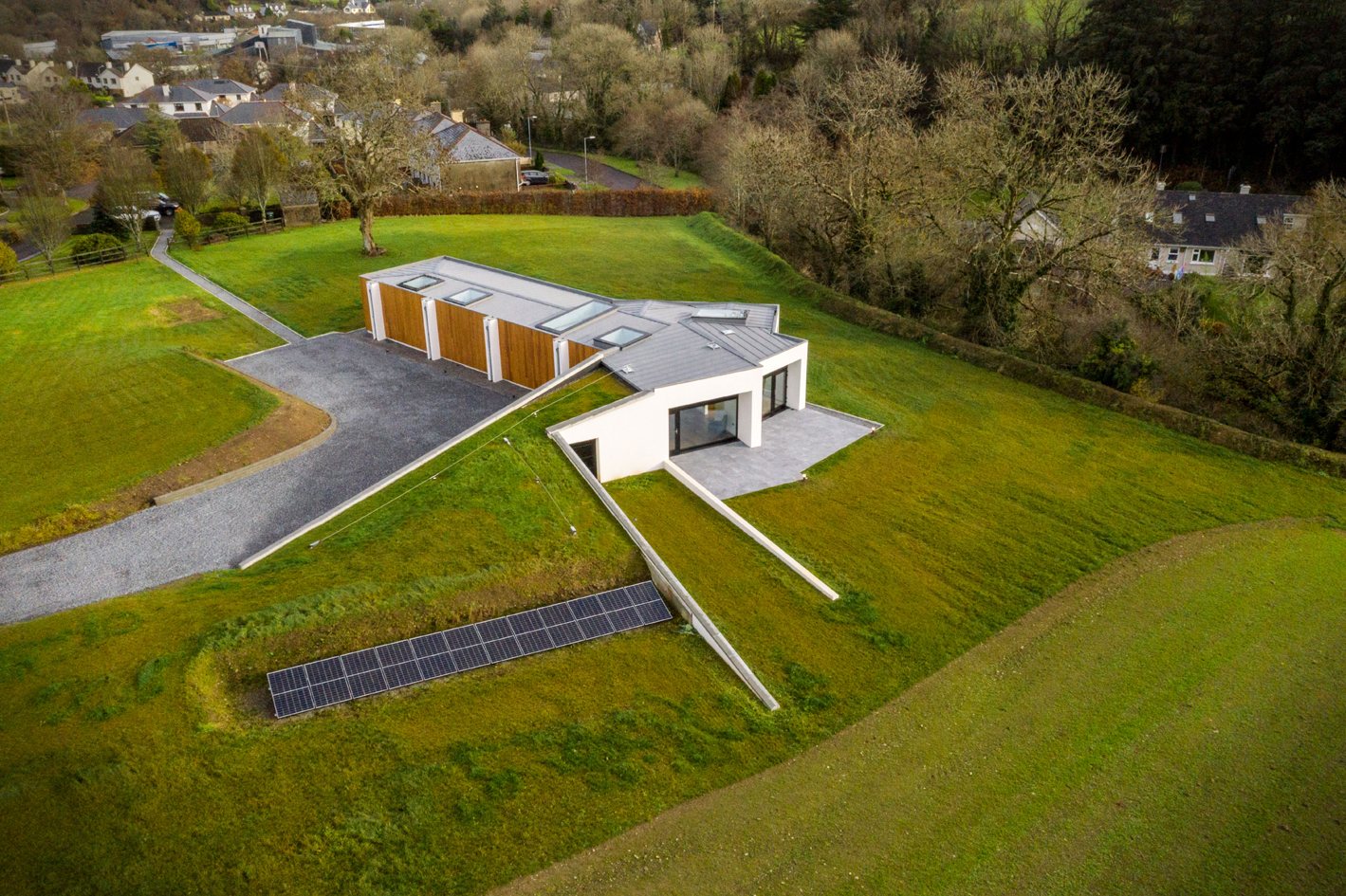 THANK YOU FOR READING OUR BLOG POST ON A1 BER PASSIVE HOUSE IN COUNTY CORK.

I would love to hear your comments BERS,  if you have any questions post them in the comments below and I will get back to you. Thank you for reading my blog on this issue and do share it using the buttons opposite!

Also you can leave a comment or question below.

You are invited to post your questions on this topic in the comment section at the end of the page and we will advise you as best we can….

The PassivHaus Architecture Company features in The Best Architects in Cork consumer page. We are delighted to be listed on this consumer page high-lighting the top 5 architecture practices in Cork. The practices have been assessed in terms of - Quality and Range of...

Interviews with Paul McNally architect on the Bandon PassivHaus

Interview with University College Cork Architecture Society The following are two interviews on the Bandon PassivHaus project, and links to articles in printed publications.  The next interview was with Jonathan Reinhardt from Archly.ieThe project featured in the...

‘Building industry gets an F for sustainability’

Paul McNally was interviewed by the Irish Examiner journalist John Daly in relation to Sustainability Week 2020. The article was published online on the Examiner website on 20/5/2020 and in the Business section of the paper on Friday 22/5/2020. See this link to read...

Clonakilty Passive House Our Clonakilty passive house is almost complete. This will be our most successful example of truly low carbon construction yet. Not only will the energy consumption of this house be almost zero due to the exceptionally efficient design, form,...

How NOT to Hire a Good Architect!

How NOT to Hire a good Architect! I have written at length here on how to hire an architect, how my process works and why it is in a client's interest to follow the tried and tested method, in order to have a good project outcome. However, some people never listen,...

What’s a typical timeline to design and build a house?

This website uses cookies to improve your experience while you navigate through the website. Out of these, the cookies that are categorized as necessary are stored on your browser as they are essential for the working of basic functionalities of the website. We also use third-party cookies that help us analyze and understand how you use this website. These cookies will be stored in your browser only with your consent. You also have the option to opt-out of these cookies. But opting out of some of these cookies may affect your browsing experience.
Necessary Always Enabled
Necessary cookies are absolutely essential for the website to function properly. This category only includes cookies that ensures basic functionalities and security features of the website. These cookies do not store any personal information.
Non-necessary
Any cookies that may not be particularly necessary for the website to function and is used specifically to collect user personal data via analytics, ads, other embedded contents are termed as non-necessary cookies. It is mandatory to procure user consent prior to running these cookies on your website.
SAVE & ACCEPT